I invented this dish in honour of my first ever home grown courgette from my garden.  Less than 3 meters from plant to plate, that’s not bad going!  I have to say, I was actually impressed with myself for coming up with this recipe.  A lot of my cooking sometimes feels like rehashing the same old things in new and different ways.  This recipe was actually new and different and so, so , so delicious!

It is actually a simple recipe with just a few fiddly bits.  I would recommend a stick blender with a goblet attachment but you could use a food processor if necessary.  (Mine came from Tesco for £15 so it doesn’t have to break the bank.) I would also recommend a mandoline (£9 from Wilkos, see, doesn’t have to bee that bad).  However, you can easily use a vegetable peeler if you don’t fancy giving up the cupboard space. 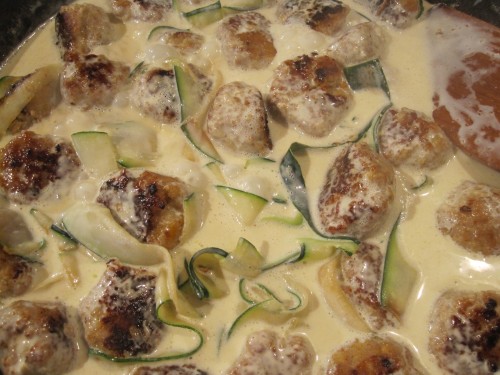 – Use the mini blender to blitz the bread into crumbs.  Place the crumbs in a medium sized mixing bowl.
– Put the onion and bacon, roughly chopped, in the mini blender and blitz until they become a paste.
– Add this to the breadcrumbs.
– Add the turkey mine, the egg and the garlic.  Season to taste.
– Mix until everything is well combined.
– Heat a few tbsp of olive oil in a very large frying pan.
– Pinch off small, walnut sized balls of the mixture and lightly roll into balls then place in the hot oil.  The mixture will be a little wet but don’t worry.
– Gently turn over the meatballs after 4 minutes and continue to cook on the other side for another 4 minutes.
– If you have a big enough pan you can do this in one batch, if not, do half, put on a plate then do the next half.
– Take the meatballs out of the pan and place on a plate to one side.
– Add the courgette ribbons to the pan and stir gently until the ribons are just starting to cook.
– Add the meatballs back to the pan.
– Pour over the cream.  Bring to a light simmer and simmer gently for 6-8 minutes stirring occasionally.
– The sauce should go a golden colour once it has picked up all the flavour from the meat.
– Serve with linguine, tagliatelli or spaghetti, something long an thin anyway. 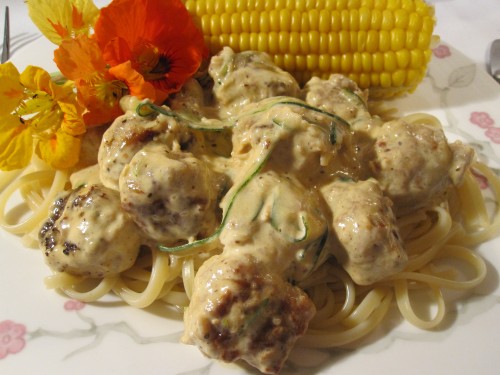