– Melt the butter in a medium sized pan. Add a small splash of olive oil to stop it catching.

– Add the mushrooms, garlic, salt and pepper. Cook until soft and browned.

– Blend with a stick blender until your desired level of smooth. (I like bits in my soup but if you want a totally smooth soup you’ll need to decant into a liquidiser and blend in that then resume cooking.)

– Bring the soup to a boil then turn down to a simmer.

– Add the cream and heat gently until the edges are bubbling.

– Serve hot with bread and butter.

From time to time I find myself craving the food I had in Japan. Sometimes it’s the simplest of things, like this Japanese egg salad sandwich. Because even though you’d think there isn’t much wiggle room in how to make egg salad you’d be amazed what a difference a few little tweaks make. I think the biggest difference is that the egg is mashed, not chopped and the mayonnaise must by kewpie for a truly authentic taste. The pinch of salt adds that little je ne sais quoi that makes this run of the mill sandwich spectacularly moreish!

– Put the eggs, mayonnaise and salt in a bowl and mash with a fork until there are no large chunks. You could even use a food processor to get it even smoother (some conbini do) but I prefer a little texture.

– Spread the bread with butter and add the egg mix. This should be a well filled sandwich! (Though factors such as egg size and bread size will affect it, you may find this makes two less well filed sandwiches if using smaller bread.) 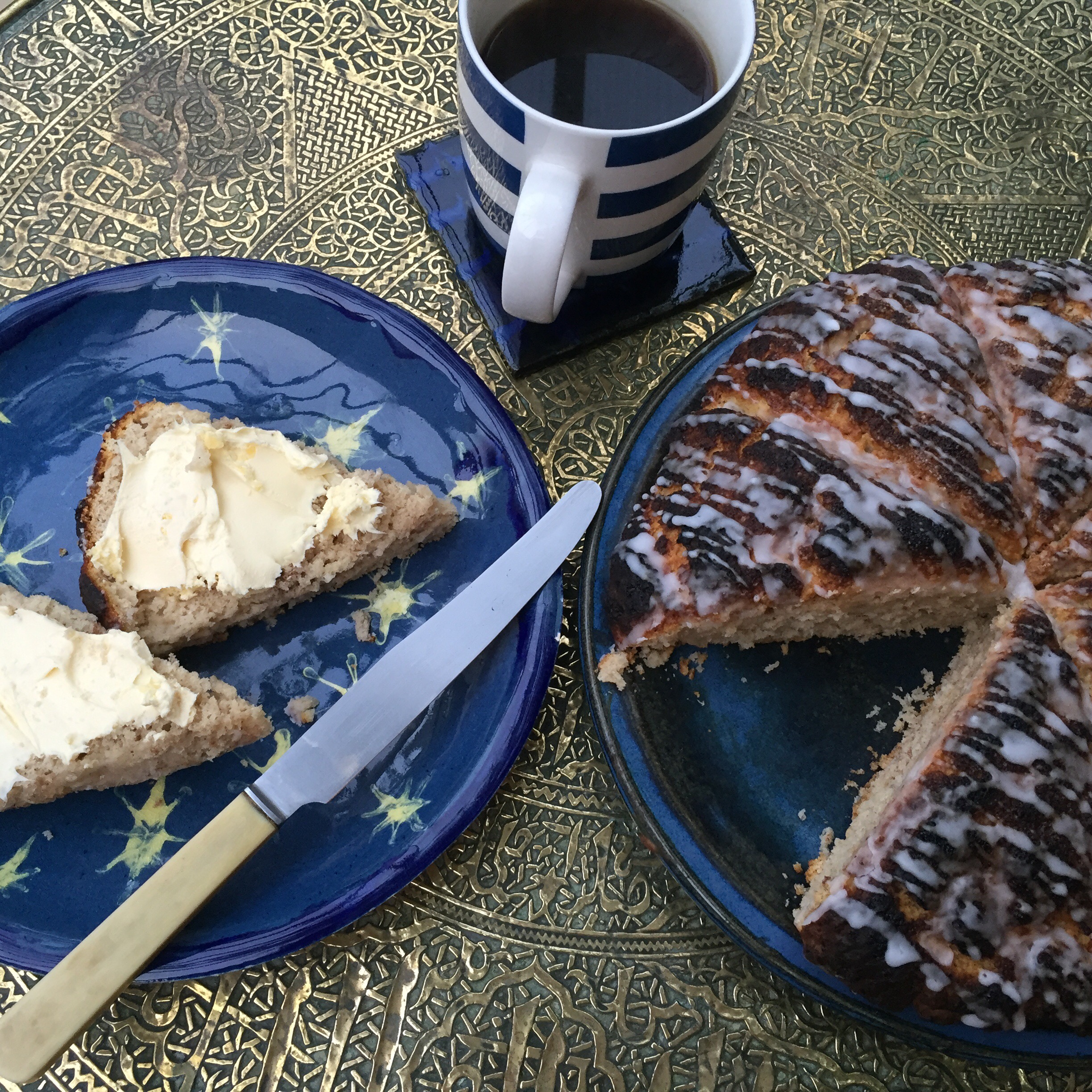 This Cinnamon Scone Cake was actually the first of the Giant Scone Cakes. I had the idea of a cinnamon flavoured scone smothered in clotted cream and honey and I couldn’t rest until it had been created!

a pinch of salt

– In a large mixing bowl mix the flour, salt and baking powder.

– Rub the butter into the flour mix until it resembles coarse breadcrumbs.

– Add the sugar and cinnamon and stir lightly.

-Mix in the milk quickly and thoroughly but be careful not to over mix the dough.

– Trn the dough out onto the baking tray and use floured hands to shape into a round.

– Slice though the dough to to the number of sections you want.

– Brush the top with a little milk and a sprinkle of brown sugar and cinnamon.

– Bake for ~30 minutes until the sugar on top is caramelised and the scone cooked through.

– Mix the icing sugar with just a little water then drizzle over the top.

If you’re quick you may just get to the last of the wild garlic in a shady spot.  The distinctive smell should guide you! 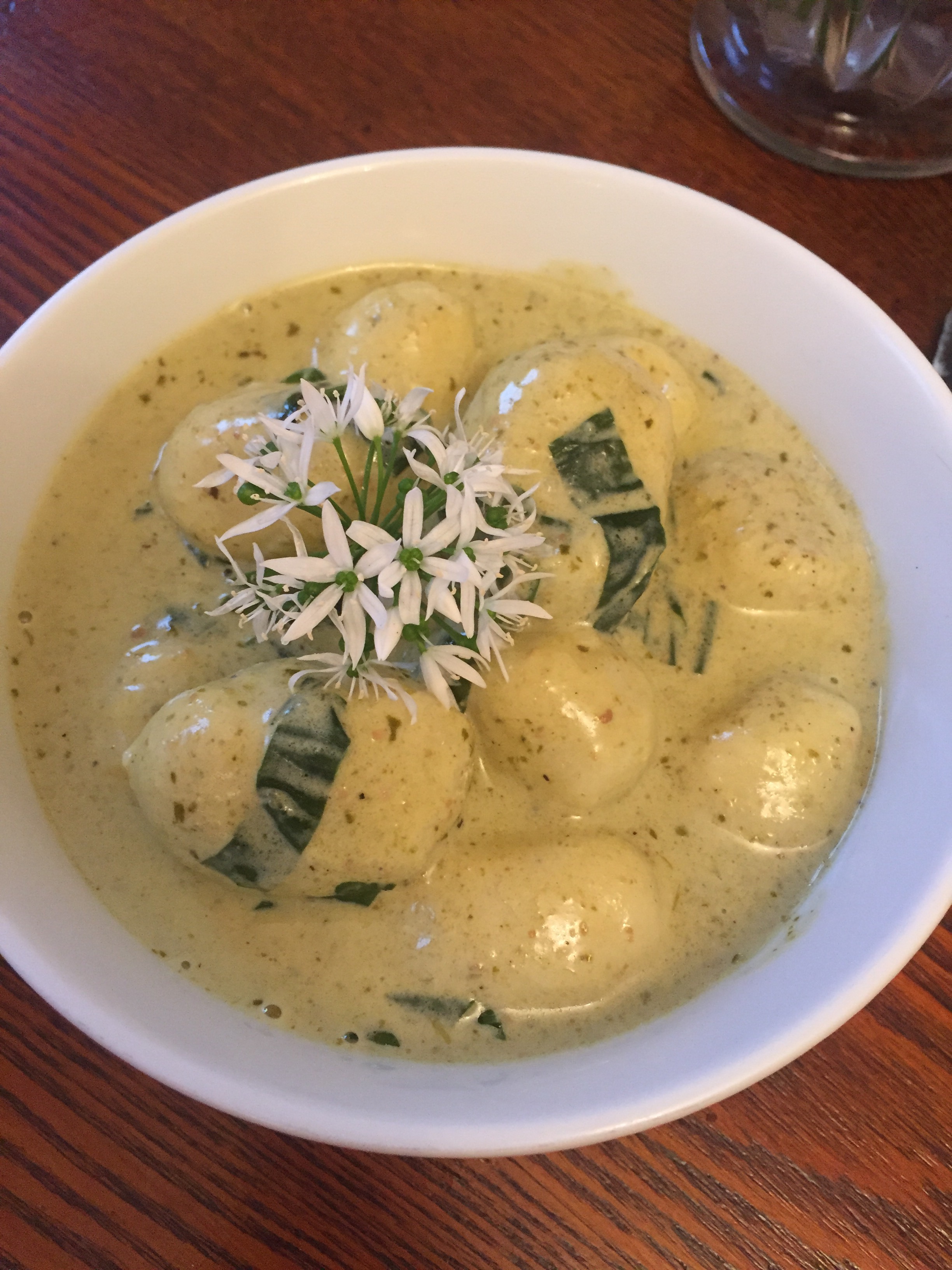 This is a quick easy supper that takes advantage of the wild food available for such a short season. Although, I admit, I grow some ‘wild’ garlic in a container in my garden for convenience and I always find gnocchi very satisfying after a long day in the garden!

The last of the home grown rhubarb is coming this month, after that you need to let the plants rest and regroup.  So I whipped up this Rhubarb and Orange Frangipane Tart to make the most of it while it’s still with us! 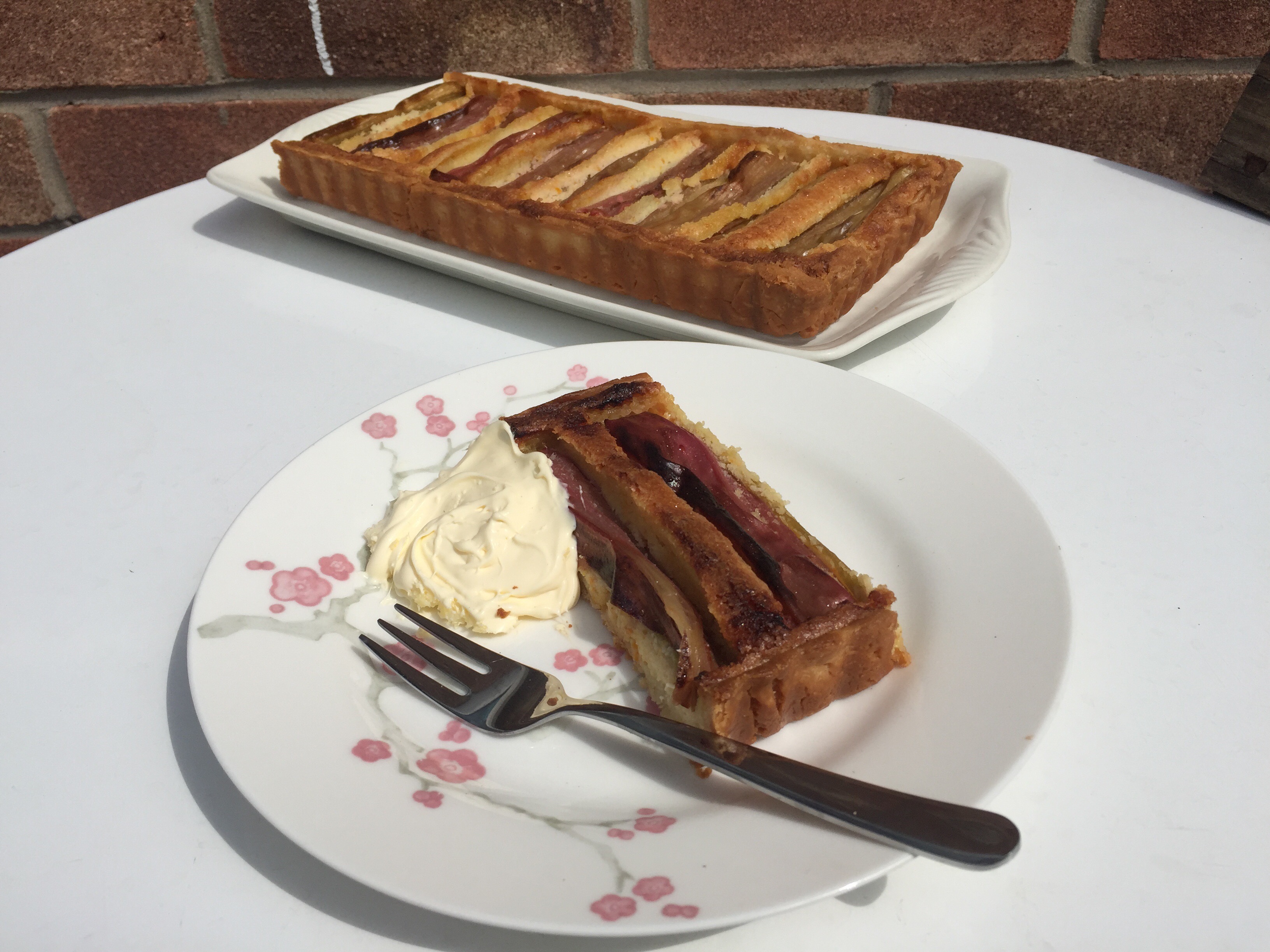 The later season rhubarb isn’t as vibrantly coloured as the younger forced rhubarb you get at the beginning of the year, if you made it with that then this would really be a pink showstopper!  However, the regimented rows of rhubarb are very pleasing to me and the taste is amazing!

The natural tartness of the rhubarb and the sweetness of the orange frangipane go together so well and make a wonderfully refreshing tart that’s full of flavour.

A lovely simple biscuit, quick and easy to work with and it gives a delightfully crisp buttery biscuit.  Nothing fancy at all, as simple and wholesome as a biscuit can get! These biscuits remind me of some I had as a child at a farmhouse on the way to the lake district. There were no such things as hygiene certificates then, this was literally the farmer’s wife selling tea and biscuits in her kitchen and they were some of the best I’ve ever had!