Prawns and Red Lentils with Rice

This dish came about because I had defrosted a bunch of prawns for a salad… and then the weather changed.  It was horrible!  So I wanted a nice, warming, filling dish to warm me up and bring some sunshine back into my life! This prawn and red lentil dish hit the spot nicely!

It was nice and simple to throw together and just half an hour of simmering works wonders on the depth of flavour you get from a dish like this.  The ingredient list might seem a bit long but I promise you, it doesn’t take that long to throw it all in a pan and the combination of flavours really works!  I also managed to get my workout in while it was simmering so that was a nice bonus!

– Heat a splash of oil in a large heavy frying pan (I adore my enamel cast iron pan for this kind of dish!)
– Add the onion and spices and gently cook for a few minutes until the onion in soft and the spices are fragrant.
– Add the pepper and cook for another two minutes, stirring occasionally.
– Add the tinned tomato, rinsing out the tin with the hot water, to coconut milk powder, the tomato puree, garlic puree and the stock cube. Give it a good stir to mix.
– Add the lentils and stir in.
– Leave to simmer on a low heat for 30 minutes until the lentils are soft and the liquid reduced by half.
– Add the prawns and heat through until piping hot.
– Serve with rice, or without as a nice Fast Day option.  You can sprinkle a little fresh chopped coriander on top for a little more panache!

Salmon and Veggies in Foil Packets

A simple dish to throw together these salmon and veggies in foil packets are an easy, tasty and very low mess way of prepping a nice fillet of salmon and some beautiful fresh veggies.  Use whatever veggies float your boat.  Here I’ve used baby courgettes, sweet red peppers and asparagus but you could use bok choi, tomatoes, aubergine.  Lemon slices are a really nice addition too but sadly I didn’t have any in! You can prep them in advance and then store them in the fridge so they’re great for a weeknight supper.

– Heat the oven to gas mark 5.
– Lay all of your veggies out on a large sheet of foil.
– Place the salmon on top.
– Fold in the edges of your foil to make a sealed parcel.
– Place in the oven and cook for 45 minutes until the veggies are tender and the salmon cooked through.

I have eaten many many roast dinners in my time but it is actually quite rare that I get to cook one myself.  So it was with great joy that an alignment of a bargain joint of beef and a free Sunday evening coincided to allow me to do my own roast beef for the first time! 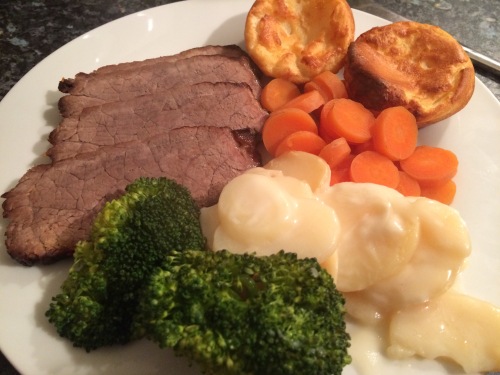 Now the roasting of a joint of meat is pretty simple.  It just involves a bit of maths!

So, say you have a 1.5kg joint and you want it done medium.

Therefore you cook your beef for 1 hour 45-50 minutes and Boom! Roast Beef!

Let your beef rest for 15 minutes or so before carving.

If you use a roasting dish that you can then apply direct heat to you can add boiling water, a beef stock cube and a few tsp cornflour mixed with a tiny splash of water and mix it all together on the heat for gravy. Stir it well scraping up all the meaty juices and allow to thicken over a medium heat. 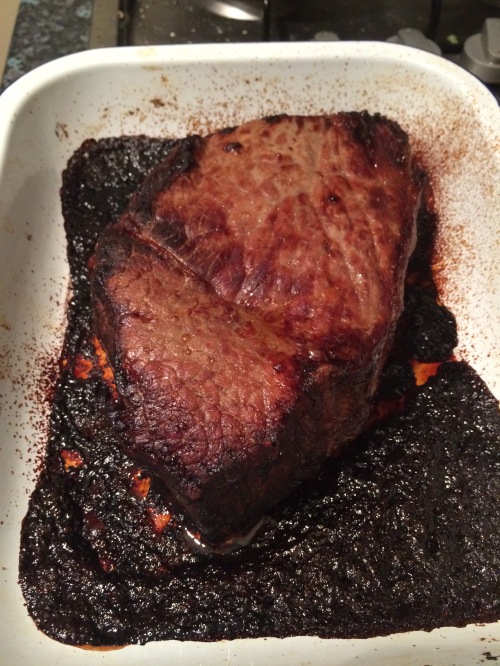 In The Garden: Tiny Wildlife Pond

I try to keep my garden as organic as possible. I may in dire circumstances use insecticide but only as a last resort.  I refuse to use slug pellets in particular because they are terrible things… Which leaves me with the problem of what to do with the £&@!ing slugs! They eat EVERYTHING!!! I have managed to get the birds used to the idea that there is food available to encourage them to come to my garden and snack but I want to encourage the toads and frogs to take on the ground assault!

This is my tiny little Wildlife Pond tucked under the bench in a shady spot. It’s a cat litter tray! Simple and effective! I’ve piled rocks and stones around it and made sure that there is easy access and exits to allow my amphibious friends to come and go as they please. Even though it is sheltered it stays topped up with rainwater and I can easily add more to it in hot weather from the rain barrel. Hopefully the motto “if you build it they will come” will ring true and the frogs and toads will find it a welcome addition to the garden and they will nom the slugs for me!

Filed under Gardening, Not Food

Almost forgot about this labour of love!  For Christmas this year I decided to hand sew all of this felt food for my friend’s kids… I’m not going to lie, it made me so happy making it!  So much fun!

It took forever and, of course, I was right down to the wire stitching until December 23rd!  But I was so happy with the end results and I hope the kids have enjoyed playing with it as much as I know I would have when I was little!

Bacon, egg and cheese sandwiches or even BLT if you fancy!  I hand drew the bread templates then sewed round the edges attaching a strip of darker brown for the crust then turned it inside out and stuffed it and sewed up the gap.  If I were to do this again I think I would keep the stitching on the outside and do a nice blanket stitch so the bread would lie flatter.

Eggs were 2 wiggly white blobs with a stightly stuffed yellow circle appliqued to one before blanket stitching them both together round the outside.

Cheese was 2 squares of yellow, holes cut out and then all of the edges blanket stitched together.

Lettuce was wiggly green circles, folded in half and a stem stitched on just in from the fold then opened back up again.

Tomatoes were 2 circles of dark red with holes cut out and one slightly smaller circle of bright red sandwiched in the middle to show through the holes.  Again, the edges were blanket stitched together. 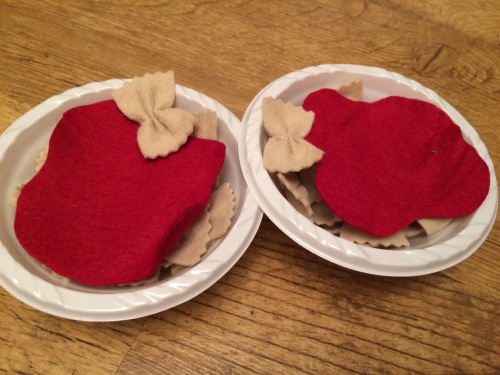 Little bowls of pasta!  Simply cut a long strip of biscuity felt about 1″ wide and snip every 1 1/2″ with pinking sheers.  Then a few quick running stitches through the centre and pull tight and knot to make a bow.

Tomato Sauce is simple, a wiggly red piece of felt! Can also be used as  Jam or Ketchup in sandwiches.

While looking for inspiration I had read a wild mummy blogger rant about the inherent unhealthiness of all of the felt food she had ever seen in her entire life ever!  So in fear of retribution if I made donuts I made a salad!  Wiggly rocket leaves simple with a line of stitching up the middle of each and tomatoes made of circles of red drawn together at the top and stuffed with a little green cap sewn on to cover the join. 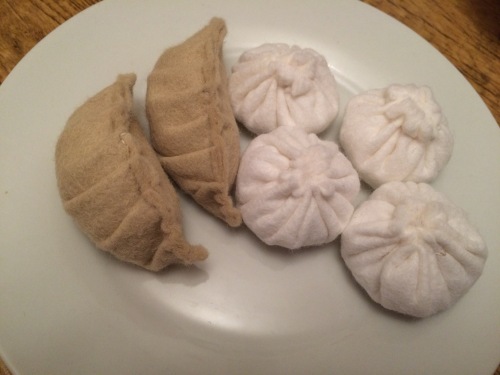 Dim Sum were nice and simple, the Gyoza are circles of biscuit coloured felt folded in half and stitched with one edge crimped (just as you would make proper gyoza).  The others would also pass for Garlic too and were even simpler; circles closed with running stitch and the edges turned out instead of in for a bunched top!  I was going to make Siu Mai too but I ran out of time!

Filed under Kitchen Crafts, Not Food

These yummy ribs are based off the recipe my mother has been using for family BBQs since forever!  I gave them a bit more of an Asian twist and I prefer to slow cook my ribs rather than BBQ them… although give it a couple of months and I’ll be more than happy to BBQ! 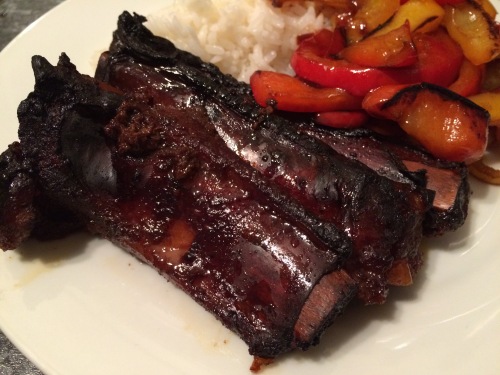 They’re deliciously sticky and moreish!  Make sure you have napkins on hand!

You start with a nice long soak in a marinade.  I love these Pour and Store bags for things like this, they seal nice and tight and don’t take up too much space in the fridge. 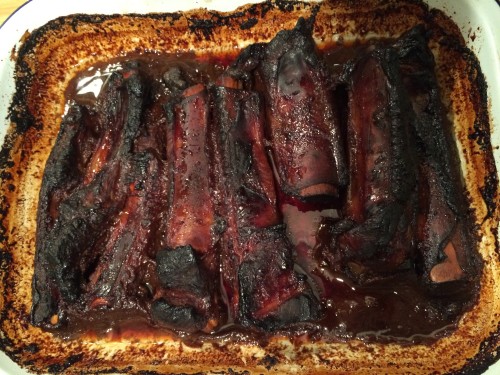 Sometimes you just want to throw food in the slow cooker and forget about it for 3 hours.  If that food happens to be deliciously cheesy pasta then you are in luck!  I have a brilliant recipe here for you that will provide sustenance and comfort on even the laziest of days! 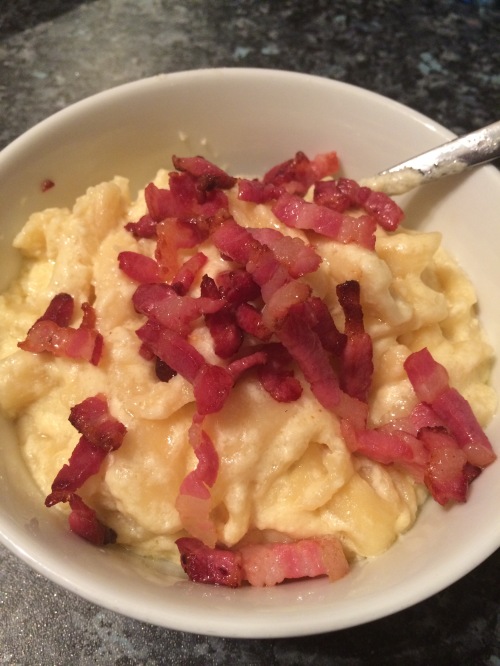 – Throw everything into the slow cooker except the bacon bits.  (Try to do it in the same order as the ingredients list, at the very least keep the butter and the cornflour on the very bottom.)
– Turn the slow cooker on to High.
– Wait 3 hours, stirring it occasionally.
– Serve scattered with crunchy bacon bits!