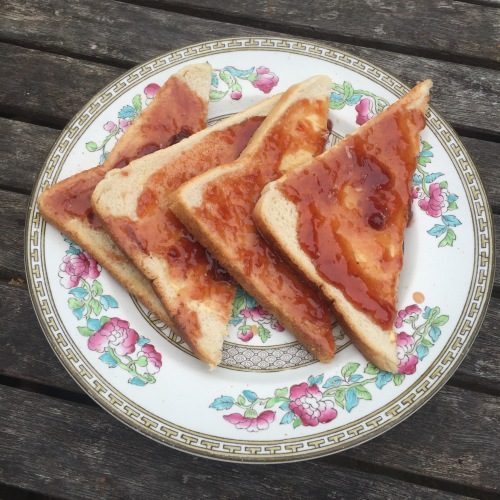 I wasn’t feeling great today so I treated myself to a cup of coffee to start my day. 1 sugar isn’t bad, I suppose, but it’s still not my favourite! Breakfast was toast and jam. I smeared 5g of butter over my toast sparingly! Oh how thankful I am for jam! Making your own jam during rationing was encouraged and you could trade your ration coupon for preserves for sugar at certain times of year. (1lb preserves got you 1 lb sugar, which would usually make you just under 2lbs jam so it was well worth it!)

While working today I say with a huge pot of tea made with 2 teabags. This kept me going for hours!  A pot of tea is definitely the way to go! A whole lot of errands took up my afternoon and I ended up grabbing a Sainsburys Basics sausage roll for my lunch. I figured that the quality was probably on a par with post war fare!

I popped in to my local butcher and had a good chat with him. (His father ran the shop during the war and apparently there was an awful lot of ‘stretching’ of the rules going on!) I got some mince for tomorrow and a pot of proper dripping for my cooking fat ration.

Dinner was fish cakes with oven potato ‘chips’ and boiled cabbage. I am not a fan of boiled cabbage. I love cabbage but boiling it is just rubbish! I like my cabbage braised or covered in butter. As it was I sprinkled it with plenty of salt and that helped. I do wonder what my salt consumption is looking like this week as it’s such an easy way to get more flavour out of your food!

Fish cakes: Boil and mash 3 medium potatoes, (I did 6 and saved half for potato pancakes tomorrow!) Cook 1 very small (3oz) fillet of white fish (I should have poached it in a little milk, it was late so I microwaved it!) mash the fish into the potato adding salt, pepper and chopped parsley. Shape into patties and roll in breadcrumbs. Bake for 20 minutes at gas mark 8.

Oven ‘chips’: Thinly slice 2 potatoes, melt 1/2oz cooking fat in an oven tray. Add the potatoes, spread out flat and bake in the oven at gas mark 8 for 20 minutes, brushing the melted fat over the top occasionally.

And then pudding! I really craved something sweet last night (chocolate!) so tonight I thought I’d stave that off by doing baked apples with custard.

Baked Apple: Core a cooking apple and fill the hole with ~2tbsp sultanas, drizzle with honey and bake at gas 8 for 20 mins) serve with Bird’s custard powder made according to the instructions. (Saving the rest for later!)