I love Japanese food and I enjoy cooking it now and again.  The rest of my family aren’t quite so enamoured of it I’m afraid.  I think they find it rather bland and boring but I love the simplicity of it and how the ingredients are allowed to speak for themselves rather than being overwhelmed by seasoning and sauces.  Tonight I made Nabe with Renkon Chips and Deep Fried Tofu.

Nabe, or Nabemono, is essentially a one pot stew, traditionally cooked at the table in a particulat dish, the nabe, but I did it on the stove in a large casserole dish.  You don’t have to stick to this recipe in the least, just adapt to what you have in stock.  Shitake mushrooms make an excellent addition.  The dashi and konbu and renkon (the dashi is a powder that you add to water to make dashi stock, the konbu is dried seaweed and renkon is lotus root) are the only speciality ingredients and you can get them at any decent chinese supermarket or japancentre.com have all three in stock at the minute .  I actually got my konbu in Sainsburys originally.

– Add the dashi powder and konbu to a large pot of boiling water.
– Bring to the boil and add the chicken breast.
– After 5 minutes add the carrot, cabbage, water chestnuts and lotus root to the pot.
– After 20 minutes add the leek and tofu.
– Continue to heat until all of the vegetables are cooked, about another 5 minutes.
– Sprinkle the spring onion on top before serving.

When varying the contents adjust when you add things dependent on how long they take to cook: meat, root veg, soft veg and take care with the size of your chunks.

The Japanese theme continues tonight with Okonomiyaki (お好み焼き).  Often called Japanese Pancakes or Pizza, I can see where they’re coming from but it’s more of an interesting hybrid.  I used to eat this a lot when I lived in Japan the first time.  There was a tiny little restaurant that did great Okonomiyaki and Monja, something I’m still looking for a good recipe for, in my neighbourhood.  I never had it the second time I lived there and having tasted it again tonight I really don’t know why, it’s delicious!

My mum has been calling this ‘Economyaki’ and she’s kind of right.  It is dirt cheap to make and I usually have everything in the cupboard.  If you don’t have some of the specialist stuff like bonito flakes then don’t worry about it, it tastes equally good just with mayo and ketchup!  We have an electric pancake maker that goes on the table top so I use this to cook them in front of everyone, if you don’t have something similar just use a nonstick frying pan and serve it from the hob.

I am so happy that this turned out so well, I was really afraid it wouldn’t taste like I remembered or that my family would hate it.  Luckily it was fantastic and even my little sister, who hates cabbage with a passion, said it was delicious, she had hers with ketchup and mayo because she didn’t think she would like the sauce.  She’s actually kinda mad that I made her like something with cabbage in it, oops!

For the ‘pancake’:
3/4 cup dashi (or water)
1 cup plain flour
1/4 head of white cabbage, thinly sliced
1 egg
Your choice of toppings, I like shrimp, cooked bacon bits and may be some spring onion.

– In a small pan mix together the sauce ingredients and heat until boiling.  Mix well so that everything is combined and smooth then allow to cool.
– In a medium bowl mix together the ingredients for the ‘pancake’ with a spoon until well combined.  If preparing at the table I like to put in the dashi followed by the flour, followed by the cabbage, break the egg on top then arrange your toppings on the top. 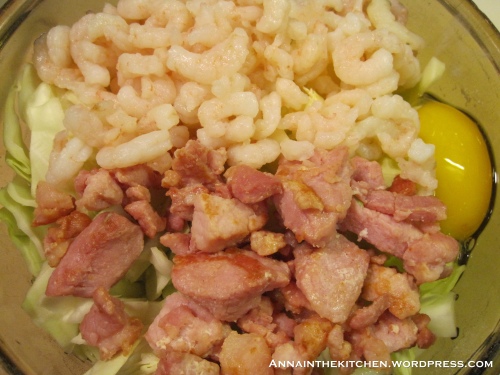 – Spoon out the mixture onto your cooking surface in the servings you want, shape lightly into rounds and then leave for a few minutes until the base it lightly browned and you can see the change in texture about half way up the ‘pancake’.
– Flip it over using two spatulas.  Be careful though, it is never as easy as you think it will be!
– Leave it for another couple of minutes until that side is browned too.
– Serve with mayonnaise, okonomiyaki sauce and bonito flakes.

What is a roast without vegetables?  I love vegetables!

I usually steam most of my veg.  If you don’t have a steamer I very much recommend getting one.  I use mine a lot for both veg and especially for Japanese foods.  I even have a microwave steamer, technically for doing rice and pasta, that I use for making individual portions although the timings are very different for that.  If, however, you don’t have one then you can improvise with a sieve and a pan. 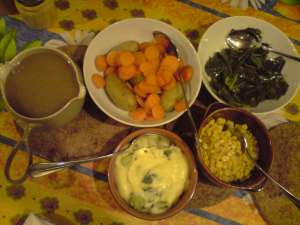 These are guidelines more than anything, if you cut your veg bigger than I do or choose larger potatoes then they’ll take longer to cook.  Test before serving by poking with a sharp knife.  The knife should slip easily through the vegetable if it’s cooked.

I like to stirfry courgette slices in a little butter or olive oil, they take about 10 minutes on a low to medium heat.  They’re cooked when they start to go soft and a bit see through.

Sweetcorn from a tin is best done in the microwave.  Drain, tip into a dish with a small knob of butter, cover and microwave for 2 minutes.

– Clean, if necessary, and horizontally slice your leeks.
– Put them in a microwaveable dish with a good splash of water (about 5mm in the base is good) and a pinch of salt.
– Cover and microwave for 7 minutes.
– In the meantime make a white sauce by melting the butter in a heavy bottomed pan and whisking in the cornflour to make a paste.
– Remove the pan from the heat and add the milk and a pinch of salt.
– Place the pan back on the heat and whisk constantly until the sauce thickens.
– Drain any remaining water from the leeks and then pour the white sauce over the leeks.
– Place in the oven to keep warm until serving.

Cabbage, any colour.  I prefer white.
a knob of butter
a splash of water

– Chop or tear the cabbage into small pieces.
– Melt the butter in a heavy bottomed pan, add the cabbage and sprinkle with salt.
– Stir until the cabbage is nicely coated with butter and starts to ‘pop’.
– Add the water, cover and keep on a medium heat until the water is absorbed and the cabbage tender.  When it is cooked it will have become ever so slightly transparent.