I have no idea what happened but I actually wrote this post back in February but never posted it… sorry about that! Better late than never!

Last week I was walking through Newgate Market in York and spied the fishmongers.  Now, I often flirt with the idea of fish but Japan spoiled me a bit coz everything there was perfect.  One of my favourite izakaya dishes was a simple crab salad.  Crisp iceberg lettuce, a tangy citrus dressing and the body and claws of what I have since been informed were Spider Crabs.  The crab I bought off the market was just a common or garden crab, but still, one crab is much the same as another in essentials!  I named my crab Claude. 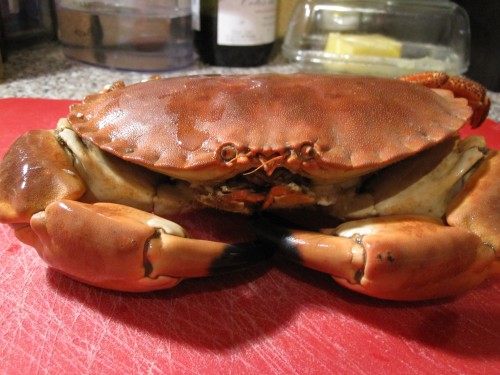 As for what to do with your crab, well, yes, you can buy a crab ready taken apart and dressed… my way is a lot more fun!  The best advice I can give you, however, is to google “how to dress a crab” and watch a few different videos.  Seeing how it’s done a few times will be much more helpful than anything I could write here.  Unfortunately I wasn’t able to make my own video or even a step by step.  However, I did want to document the process here as a point of reference if nothing else.

So, without further ado let’s get to it!  This is a bit of a fiddly job and rather messy so leave yourself plently of time and space.  Crab shell is also exceedingly sharp and your hands will get damp and soft so watch yourself and try not to cut yourself too badly… a few little nicks are inevitable I’m afraid!

Serves 2 if you serve it as a salad, or you can do any number of things with the meat.

– 1 whole cooked crab.  Ask your fishmonger to remove the “dead man’s fingers” as they are poisonous.

– With the crab on his back, twist/pull his legs and claws off.  Set aside.

– Turn your crab over onto his front with his tail facing towards you.  Get your thumbs and press up against the body of the crab to separate the upper and lower halves.  NB. If you have had the “dead man’s fingers” removed then it should already be cracked open a bit.
– Take the upper half of the crab and again use your thumbs to press against the mouth parts (under his eyes) and push until it snaps back, peel back to remove the stomach too. 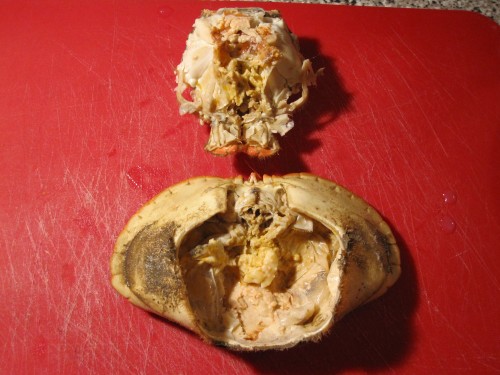 – Take a teaspoon and scrape out the top half of the shell to remove the brown meat.  Set aside the brown meat in a bowl.
– Take a very sharp large knife and cut the lower body of the crab in half, then in half again if you want.
– Using a fondue fork (or special crab stick things) pick out the chunks of white meat found in all the nooks and crannies, again, set aside in a bowl.  This is tricky and fiddly so take your time.  You want to get all of the stringy meat out.  If it feels hard then you don’t want it.
– Now for the claws!  Get your claw and place it on a board.  Cover it with a teatowel.  Bash it with a rolling pin to crack the shell.  You should be able to crack it with one good blow.  You don’t want to smash it to smithereens but you need a reasonable amount of force behind the blow.  Crab shell is sharp so the teatowel stops bits of shell from flying everywhere. 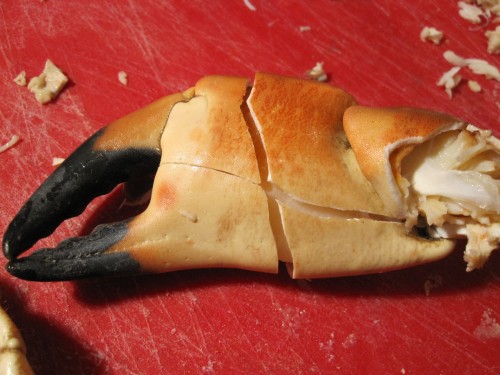 – Bash all of the joints in turn so you can get in there with your hands and break the legs apart.  Remove the bigger bits of white meat with your fingers, pulling it off the central clear spike.  The thinner parts can be removed with your fondue fork/crab stick.
– Once you’ve done all of the legs and claws and got every bit of meat out then you can do what you wish with it! 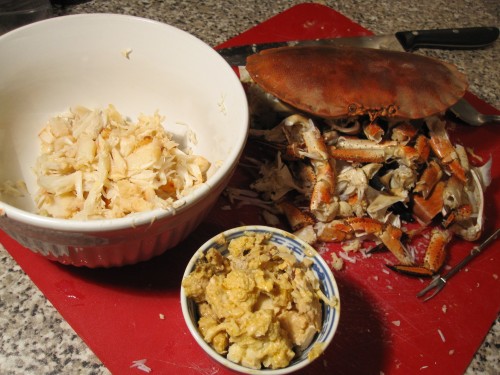 Filed under Basic, For the Keen Cook