Also called Tarte Flambée.  It’s a variation on pizza but with creme fraiche rather than tomato sauce as the base.  Toppings are similarly diverse but I always go for a ‘Campagnard’ or ‘Reine’ as I’ve shown here.  This is one of the things I always enjoy when I’m in northern France or Alsace.  Just so happens I came back from there a week and a bit ago, doing the annual trip to Italy with my mum. 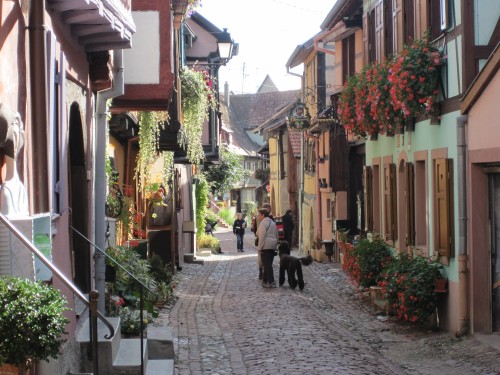 Last year I picked up a tea towel with a recipe for Flammekueche in Obernai in northern Alsace.  I love collecting tea towels whenever I travel somewhere, especially ones with regional recipes on.  My favourite bit about this towel is that not only does it have the recipe on there (such as it is) but it also has wine suggestions!  Having the thought of flammekueche fresh in my mind I decided to give it a try at home.

250g white bread dough prepared to the end of the first rise and knock down. *
300ml creme fraiche
1 onion, halved and finely sliced
3oog lardons, cooked (or you could use bacon or ham)
6-8 mushrooms (dependant on size & preference) sliced
Grated cheese (optional, I’ve had it with and without in France)

– Heat your oven as hot as it will go.  Have two large baking trays ready.
– Take your dough and split it into two.
– On a lightly floured worksurface roll out the dough until it is just a few mm thick, you’re aiming for a rough rectangle.
– Pick up the rolled dough and transfer to the baking sheet.  Press and stretch it out to the edges of the tray.
– Repeat with the other portion of dough.
– Divide the creme fraiche over each and spread out to near the edges.
– Evenly distribute the toppings over the flammekueche.
– Put in the oven and cook until just starting to catch at the edges and the dough is cooked through.  Can be as little as 10-15 minutes dependant on how hot your oven goes, could take around 20-25 minutes.
– Serve, as the tea towel recommends, with a Pinot Blanc or Riesling et Bon Apetit!

*I made a full 500g batch then just continued on to make bread with the rest of the dough.