I’ve been seeing a lot of recipes for Red Pepper sauces about the place and you know my theory, if the universe is going to thrust a recipe into my awareness then I should go ahead and cook it.  However, while it was very nice and a little different I have to say my first thoughts on the subject were proven correct.  It’s a tomato sauce.  It’s a very nice tomato sauce, the red pepper certainly adds an extra element that shakes it out of the usual run of the mill sauces.  But still, tomato.

That being said it is lovely and a nice little addition that gets you an extra one of your five a day.  So I’m willing to let it keep its delusions and perhaps roll this out when I just want something a little bit different.  As for the meatballs, well, they’re meatballs, again mixing it up a bit with pork rather than my preferred beef.  They’re a rather solid meatball, good and robust so would probably stand up well to being simmered in a sauce if you fancied. 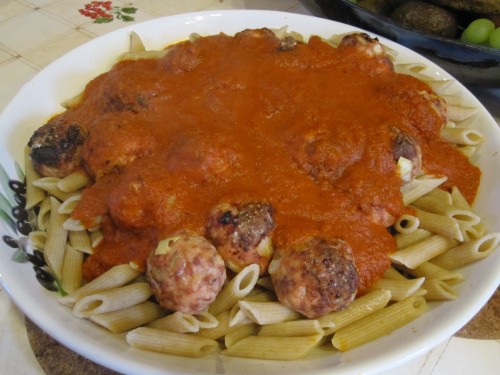 Serves 4-6 (Depends how hungry you are! Alternatively freeze half for later)

– Use your hands to mix together all of the ingredients in a medium sized bowl.
– Shape golf ball sized amounts into balls using your hands.
– Place on a floured board.
-Chill until needed, preferably 30 minutes.
– Heat the oven to gas mark 6.
– Place on a grill tray so the fats can drip down below the meatballs.
– Cook for 30-40 minutes.

– Heat the oven to gas mark 6.
– Slice the peppers in half and deseed.
– Spread them on a baking dish and spray with a little oil.
– Roast for 30-45 minutes until just blackening in places.
– Remove from the oven, allow to cool a bit and roughly chop.
– Heat a little oil in a medium sized pan.
– Fry the onion and garlic until soft.
– Add the chopped pepper.
– Add the tinned tomatoes as well as 1 can of water.
– Bring to a boil then remove from the heat.
– Blend until smooth with a stick blender.
– Season to taste.  (A good amount of salt and a few grinds of pepper should do it.)
– Simmer until ready to serve, preferably at least 20 minutes.

Serve the meatballs and the sauce tossed together over pasta.