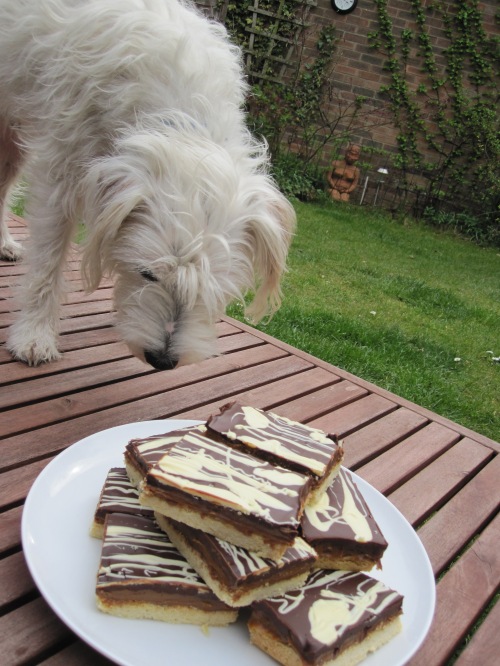 I’m calling this recipe Caramel Shortbread because it is not the Millionaire’s Shortbread I set out to create.  I messed up the caramel layer and ended up with praline instead (and delicious it is too).  But I didn’t have any more cream to make another batch so I grabbed a tin of condensed milk caramel (submerge your tins in boiling water for 12 hours in the slow cooker on low) and slapped that over the shortbread.  I really, really should have waited and gone out to buy more cream today but I didn’t.  As such I’m afraid this is so sweet as to be nearly inedible to me.  I’m eating each slice with a banana to cut it down a bit, so essentially it has become a banoffee slice.

Give the recipe below a go, it should produce caramel but go easy on it!  One split second and you have delicious praline instead… but at least you can still eat it!  If not, well, a tin of condensed milk caramel does the job… after a fashion. 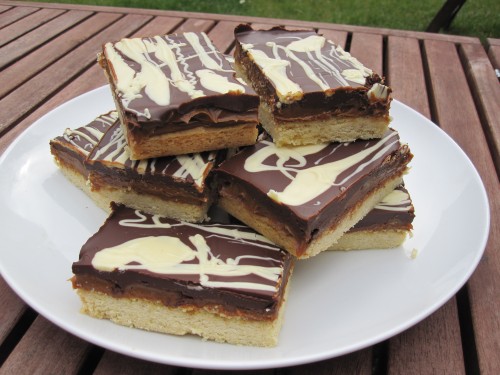 I know exactly what I am after.  I want the caramel shortbread from Starbucks, because if my latte habit weren’t bad enough I’m now forking out for one of those a day too!  I want caramel that moves but still has bite to it, shortbread that crunches but doesn’t crumble and a nice salty edge to it all and a nice, crisp snap of chocolate on top… this recipe isn’t it.  Not by a long shot.  But it is quite nice in its own right… once you come out of the sugar coma.  If you have any children you would like to sugar up before sending back to their parents (nieces, nephews, cousins, grandchildren etc.) then this recipe would work wonders I’m sure! 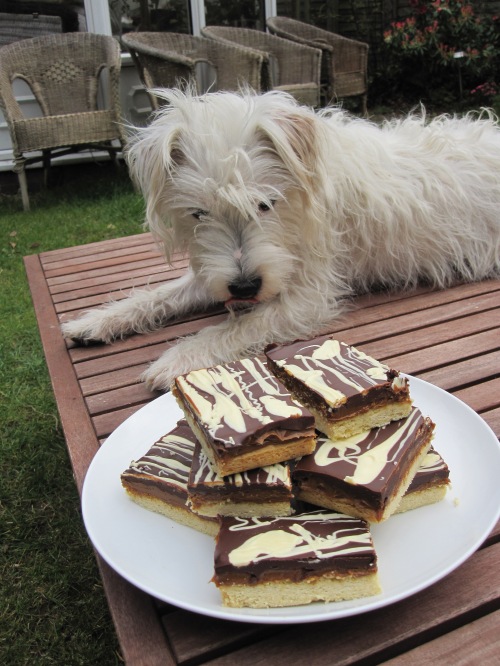 – First, line a brownie tin (I think mine is 18cmx28cm or something stupid like that) with baking paper.
– Put all of the ingredients for the shortbread in a food processor.  Blend until it comes together to for a dough.
– Gather the dough together with your hands and press into the tin to form a smooth, even layer.
– Chill in the fridge for 20 minutes.
– Heat the oven to gas mark 3 and then bake for 35 minutes.
– Remove from the oven and set aside.
– In a heavy bottomed pan melt the sugar, butter and cream together then bring to a boil and boil until it changes colour.
– Test small drops of it by dropping it into a glass of cold water.  The caramel should form a ball but still be soft.  If it’s hard then you’ve gone too far as I did.  This is the tricky bit, as soon as it changes colour, start testing!
– Once you have soft caramel immediately remove from the heat and add a pinch of salt and stir thoroughly.
– Pour this over the shortbread layer and set aside to cool at room temperature.
– Once totally cool melt your dark chocolate and butter together either in the microwave (short bursts until melted) or in a bowl over a pan of boiling water.
– Pour the melted chocolate over the caramel layer and smooth out.
– Melt the white chocolate, I find the microwave is easiest with white chocolate, just give it 30 second bursts until it’s melted, stirring between times.
– Drizzle the white chocolate over the dark in whatever pattern pleases you.
– Tap the whole tray firmly against the table/worksurface/whatever to settle the two chocolates together and give a smooth surface.
– Leave to cool at room temperature until the chocolates are hard again.
– Lift out of the tin, remove the paper, slice into 12 and enjoy… with a banana if the caramel incident is repeated! 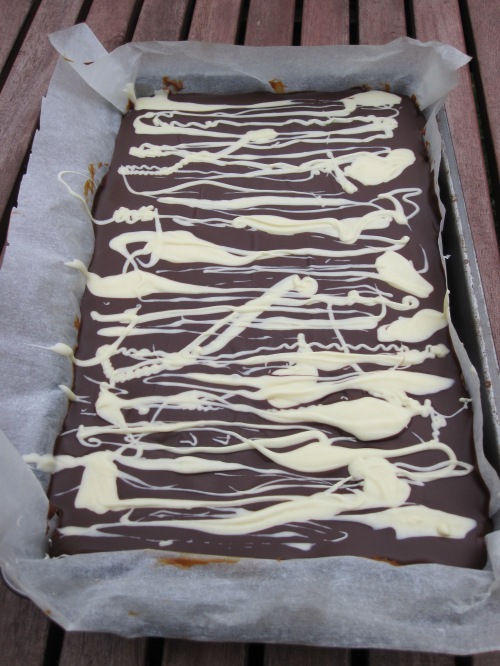 One response to “Caramel Shortbread”