A few weeks ago I was browsing in the Chinese supermarket and came across a bag full of rose buds in the tea section.  Now I’ve had flower teas before that a Japanese friend brought back from a business trip to China but I’d never had rose tea.  To be honest my mind didn’t come round to making tea with them for a while and I’m still not convinced but my first thought was “OMG, those would look adorable on cupcakes!”  I was really just waiting for the opprotunity, which presented itself last night.

I thought of using rose water in the cake part but I bought a bottle and one whiff put me off that plan.  Roses are for looking pretty and smelling, not tasting!  I may yet come around and find a use for that rose water but I’m not holding my breath.  I had been thinking of making a white chocolate buttercream to go with the imagined rose cake.  I have no idea why as I didn’t know what rose water tasted like but in my head they went well together.  As it was it was absolutely delicious with vanilla cake.  I’m afraid the photo doesn’t really do them justice for how cute they are as these are the last 4 in existence… we sort of ate the rest. 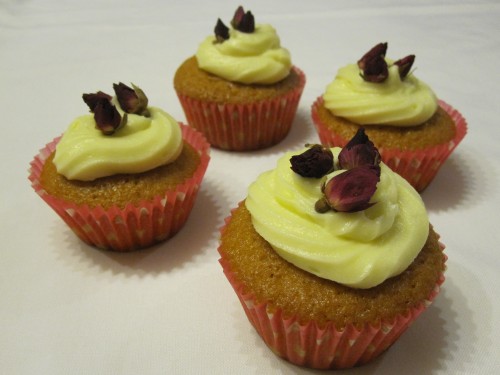 – Heat the oven to gas mark 4 and line 2 12 hole muffin tins with small sized muffin liners.
– Cream together the butter and the sugar in a large mixing bowl.
– Beat the eggs and vanilla together in a jug.
– Gradually add the egg a splash at a time, mixing well between additions.
– Fold in the flour until totally combined.
– Divide the mixture equally between the paper cases, filling about half full.
– Bake for 20 minutes, either swapping the trays over after 10 minutes or moving the bottom tray up for an extra 5 minutes  at the end.
– Remove from the tins and leave to cool completely.

– Break the chocolate into small chunks and place in a small bowl over a pan of boiling water.  Leave it to melt. Then remove from the heat and allow to cool slightly.
– In a medium sized mixing bowl cream together the butter and icing sugar until there are no lumps left.
– Add the melted chocolate to the bowl and mix well.  If the mixture seems a little too soft then just add another spoon of icing sugar and mix it in.

– Pipe the icing onto the cakes amd decorate as you wish!

Filed under Cupcakes and Muffins, Easy