I apologise for not managing to get this recipe up last night but I was all of a dither trying to get myself sorted out for my first day at work today.  I’m pleased to say it went well, I think, and even better I got to go home early because of the snow!  I’ve been planning to make kugelhopf (or kugelhof, gugelhof, etc.) for ages.  Ever since I bought myself an earthernware kugelhopf mould in Alsace this September in fact.  I finally got round to it yesterday as it was my last day of freedom! 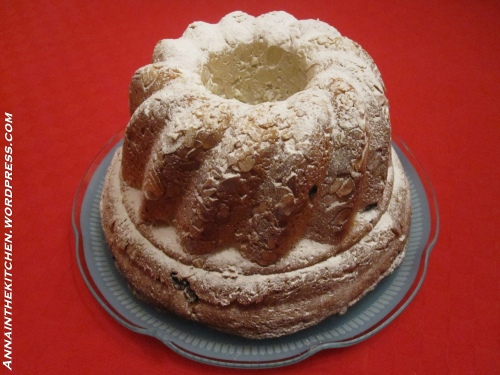 If you don’t have a kugelhopf mould then just use anything of a similar shape and size that you have.  I’m afraid this recipe does need a stand mixer aswell as the dough is rather a wet one.  I usually try to avoid recipes you can’t also make by hand but I tried and it just wasn’t working.

My first challenge was finding out how to treat the mould before using it for the first time.  I had been told when I bought it but I forgot exactly what was said to me, and it was in French, so I turned to Google.  Google was rather disappointing as the only instructions I could find didn’t seem to make sense to me.  I then had the brainwave of searching in French and lo, there it was!  For reference, should you ever need to temper a new kugelhopf mould, this is what you do:

– Rub butter all over the mould, outside and in.
– Put it in a hot oven for 10 minutes.
– Remove and allow to cool.  (I actually just popped it in the oven after cooking dinner and then turned off the oven and left it to cool overnight.)
– Rub with butter again.
– Into a hot oven for another 10 minutes.
– It is now ready for you to use!  You can go straight from here to cooking your kugelhopf if you want.
– Never wash the mould after you start using it, just wipe it out with a damp cloth and dry gently.

– First mix together 100g flour, 100ml milk and the yeast in a large bowl (preferably the bowl of your stand mixer) and leave covered in a warm place for an hour.
– Mix the raisins and the kirsch in a small bowl and microwave for 1 minute.  Allow to cool.
– After 1 hour add the rest of the milk, the eggs, sugar, salt and remaining 350g of flour.
– Mix well on a low setting until all combined.
– After 5 minutes add the butter and continue mixing until soft and smooth.
– Add the raisins and keep on mixing until well distributed throughout the dough.
– Allow the dough to rest in a warm place for 20 minutes while you prepare the mould or tin.
– Butter the inside of the mould well and press the flaked almonds into the sides.
– Scrape the dough into the mould and then leave to rise until doubled*.  The dough is supposed to rise over the edge of the mould so don’t worry that it’s quite near the top already.
– About 15 minutesbefore you think the dough will have reached double heat the oven to gas mark 5.
– Once it’s ready place the mould in the oven and bake for 40-45 minutes.
– Poke it with a tooth pick to test for doneness.
– Take the mould out of the oven and allow to stand for 5-10 minutes before turning it out onto a wire rack to cook completely.
– Put on a plate and dust with icing sugar.
– Serve in slices with your afternoon tea, toast it for breakfast, nibble on it for elevenses whatever you want!