My kitchen karma has disappeared!  Tonight I made falafel burgers and pita bread for dinner.  Now the falafel burgers just aren’t that great I am afraid to say, at least in my opinion, but the pitas… well, I’m not sure they were pitas.  They were closer to really flat bread buns!

I had seen the recipe for Falafel Burgers over at Good Food a while ago and thought they sounded great.  Not only were they low-calorie but it was a way of getting more pulses in my diet and all of the comments said how surprisingly tasty they were.  I followed the recipe exactly and I have to say I was not impressed.  They were essentially bland and squishy dollops of meh.  I ended up piling mine up with salad to try and get some flavour.  If you happen to be a fan of chick peas then I suggest doubling the amount of harissa paste and putting in at least 2 good pinches of salt.  I’m willing to accept that may be I just didn’t like them but I had such high hopes for this recipe that I find myself very disappointed.

As for the pita, I must not have knocked down the dough well enough as they came out all puffy and fat.  More like someone had sat on a bread bun than a pita!  I had made up the dough then got distracted and it sat for 30 minutes and rose quite well.  I knocked it down and carried on as usual but obviously that was a mistake.  We had to cut the pockets into them, nothing had formed like normal.  They were delicious, really lovely and soft and you could, as you see above, cram so much more than you would normally be able to inside of them but not really pita.  I may, however have inadvertently come up with a lovely flatbread recipe!

– Dry off the chick peas with kitchen paper.
– Put everything in a food processor and blend until it forms a smooth paste and everything is well mixed.
– Divide the mixture and shape it into patties with your hands.
– Fry for 3 minutes each side, or use a health grill.
– Serve with pita, salad, salsa and yogurt. 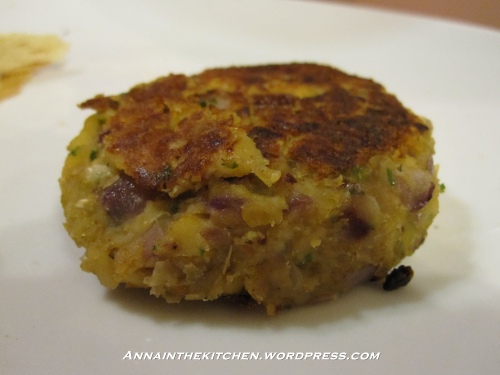