I was trying to post this recipe the night before I left to go on holiday but the internet had a massive panic attack or something and everything went horribly wrong.  As I type I’m sitting in a hotel in Colmar in the Alsace region of France.  We stayed last night in St. Quentin in the north of France and tomorrow we drive through Switzerland and into northern Italy where we will be staying for a week.  I’m already in food heaven!  Last night for dinner I had Flammekueche, sort of a pizza but with creme fraiche instead of tomato. 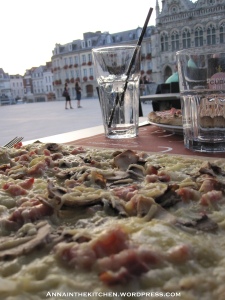 For lunch today we hit the supermarket and grabbed bread, pate, cheeses, cold meat, crisps and a tarte aux pommes and sat by the side of a canal on a blanket, simple and basic but blissful!  YUM! 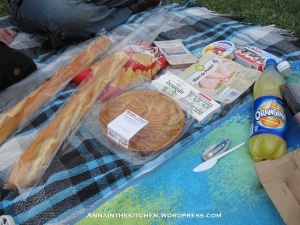 The recipe I was actually trying to post was for the plum jam I made the day before we left.  We have had a glut of plums and I was looking for something to do with them that would last until we came back from holiday so Jam it was!

– First make sure you have plums, sugar and jars/lids/wax disks and plastic covers.
– Place the jam jars, lids removed, in the oven at gas mark 1.  Put the lids in boiling water to sterilise.
– Stone your plums and weigh how much you have.  Remember this number.
– Put the plums in a large heavy bottomed pan with a little over 150ml water per kg of plums.
– Bring to the boil then simmer for 30 minutes until the fruit is soft.
– Weigh out the same amount of granulated sugar as you had plums.
– Add this to the plums along with a knob of butter.
– Bring to a rapid boil and leave at a high heat for 10 minutes or until the setting point is reached.
– To test place a little jam on a cold plate and push it with yout finger.  If it wrinkles as you push it it’s ready.
– Add another knob of butter to dissolve the scum.  Remove any remaining scum with a slotted spoon.
– Remove the jam jars from the oven and carefully ladle the jam into the jars.
– Seal while hot then leave to cool and store.