I actually only made two of these with leftovers from tomorrow’s dessert, which I will be posting tomorrow, so I’m making a rough guess at quantities for this.  I love Tiramisu, even though it took me a long time to come round to coffee as a flavour, now I’m a caffeine addict!  I do like to splash out on really good quality Amaretti, preferably from Italy, I think it makes a big difference.

– Whip the cream in a medium sized bowl.
– In a small bowl combine all of the syrup ingredients and stir well until everything is dissolved.
– In another bowl mix together the marscapone, vanilla, icing sugar, kahlua and 3 tbsp of the syrup.
– Mix together the cream and marscapone mix a bit at a time until fully combined.
– Dip each Amaretti in the syrup for a second and put in a layer at the bottom of your serving glass.  Pour 1 tsp of syrup over them.
– Spoon the cream mixture on top and smooth down.
– Grate the chocolate over the top of the cream.
– Once again dip the biscuits and arrange on top of the cream then drizzle 1 tsp syrup on top.
– Cover with cream again and then grate chocolate over the top.
– Chill for at least 3 hours.
If you like serve with a strawberry half or a raspberry for a shot of colour. 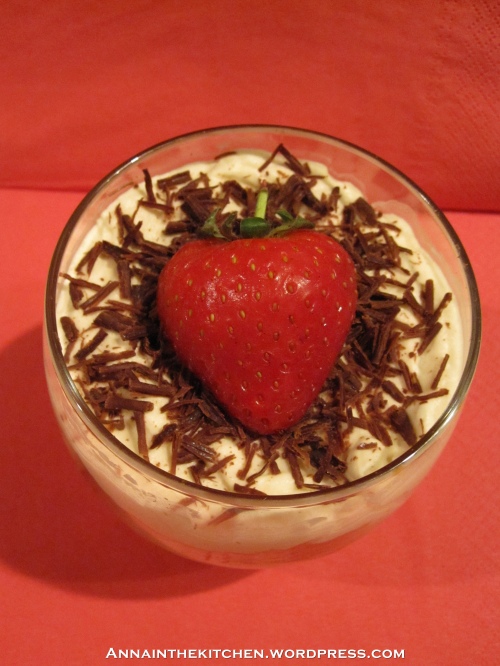